The first miracle of Jesus’ public ministry was at the Wedding at Cana, when Jesus changed water into wine (John 2: 1-10).  Marriage is a vocation, a calling, given to two people, drawn together in love and determined in a life long commitment.
Wedding Masses are at 5:00 PM on Fridays, and 11:00 AM, 12:30 or 2:00 PM on Saturdays.  All wedding arrangements must be made with a parish priest or deacon at least four months prior to the desired date. One of the parties or members of their immediate family should be registered at St. George Parish six months prior to arranging a wedding.  All couples must take part in a program of marriage preparation which includes meetings with one of the parish clergy Pre-Cana, and FOCCUS survey.   A wedding offering for Saint George Parish is required.
More information may be found in the Saint George Wedding Booklet.
Call the parish office at 708-532-2243 to arrange an appointment with a deacon. 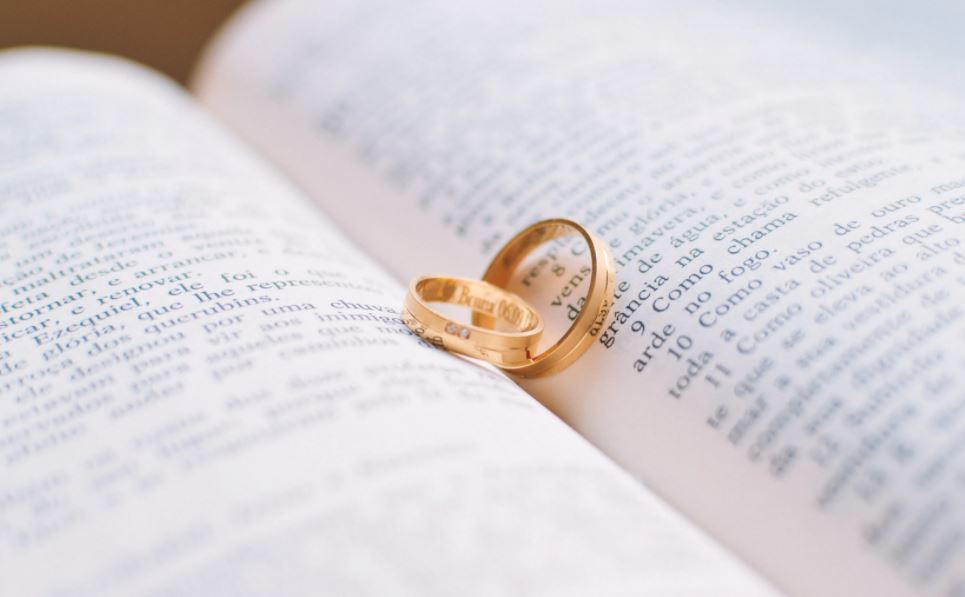 An annulment is a declaration by a Church tribunal (a Catholic church court) that a marriage thought to be valid according to Church law actually fell short of at least one of the essential elements required for a binding union.

The annulment process is frequently misunderstood.

These Annulment FAQs explain who needs an annulment, the process, and its effects.

What is an annulment?

“Annulment” is an unfortunate word that is sometimes used to refer to a Catholic “declaration of nullity.” Actually, nothing is made null through the process. Rather, a Church tribunal (a Catholic Church court) declares that a marriage thought to be valid according to Church law actually fell short of at least one of the essential elements required for a binding union.

For a Catholic marriage to be valid, it is required that: (1) the spouses are free to marry; (2) they are capable of giving their consent to marry; (3) they freely exchange their consent; (4) in consenting to marry, they have the intention to marry for life, to be faithful to one another and be open to children; (5) they intend the good of each other; and (6) their consent is given in the presence of two witnesses and before a properly authorized Church minister. Exceptions to the last requirement must be approved by Church authority.

Why does the Church require a divorced Catholic to obtain a declaration of nullity before marrying in the Church?

In fidelity to Jesus’ teaching, the Church believes that marriage is a lifelong bond (see Matt 19:1-10); therefore, unless one’s spouse has died, the Church requires the divorced Catholic to obtain a declaration of nullity before marrying someone else. The tribunal process seeks to determine if something essential was missing at the moment of consent, that is, the time of the wedding. If so, the Church can declare that a valid marriage was never actually brought about on the wedding day.

What does the tribunal process involve?

Several steps are involved. The person who is asking for the declaration of nullity – the petitioner – submits written testimony about the marriage and a list of persons who are familiar with the marriage. These people must be willing to answer questions about the spouses and the marriage. If the other spouse did not co-sign the petition, the tribunal will contact that spouse – the respondent – who has a right to be involved. In some cases the respondent does not wish to become involved; the case can still move forward.

Based upon the information that was submitted, a tribunal official will determine the process that is to be followed. Regardless of the selected process, both the petitioner and the respondent will be able to read the testimony submitted, except that protected by civil law (for example, counseling records). Each party may also appoint a Church advocate to represent him or her before the tribunal. A representative for the Church, called the defender of the bond, will argue for the validity of the marriage.

If the tribunal decides in favor of the nullity of the marriage, the parties are then free to marry in the Catholic Church, unless an appeal of the decision is lodged or the decision includes a prohibition against one or both of the parties marrying until certain underlying issues have been resolved (see Code of Canon Law, 1682.1).

How long does the process take?

The length will depend upon the type of process that is followed, e.g., the ordinary judicial process, the process before the bishop, a documentary process, or a process before a Roman court. Your diocesan tribunal will be able to give you a more exact estimate based upon your case.

How can a couple married for many years present a case?

The tribunal process examines the events leading up to, and at the time of, the wedding ceremony, in an effort to determine whether what was required for a valid marriage was ever brought about. The length of common life is not proof of validity but a long marriage does provide evidence that a couple had some capacity for a life-long commitment. It does not prove or disprove the existence of a valid marriage bond.

If a marriage is declared null, does it mean that the marriage never existed?

No. It means that a marriage that was thought to be valid civilly and canonically was in fact not valid according to Church law. A declaration of nullity does not deny that a relationship existed. It simply states that the relationship was missing something that the Church requires for a valid marriage.  If a declaration of nullity is granted, are the children considered illegitimate?

No. A declaration of nullity has no effect on the legitimacy of children who were born of the union following the wedding day, since the child’s mother and father were presumed to be married at the time that the child was born. Parental obligations remain after a marriage may be declared null.

I do not plan to re-marry. Why should I present a marriage case?

Some people find that simply writing out their testimony helps them to understand what went wrong and why. They gain insights into themselves. Others say that the process allowed them to tell their whole story for the first time to someone who was willing to listen. A person cannot know today if they might want to marry in the future when crucial witnesses may be deceased or their own memories may have dimmed.

The Catholic Church respects the marriages of non-Catholics and presumes that they are valid. Thus, for example, it considers the marriages of two Protestant, Jewish, or even nonbelieving persons to be binding for life. Marriages between baptized persons, moreover, are considered to be sacramental. The Church requires a declaration of nullity in order to establish that an essential element was missing in that previous union that prevented it from being a valid marriage, and thus the intended spouse is free to marry.

This is often a difficult and emotional issue. If the intended spouse comes from a faith tradition that accepts divorce and remarriage, it may be hard to understand why he/she must go through the Catholic tribunal process. Couples in this situation may find it helpful to talk with a priest or deacon. To go through the process can be a sign of great love of the non-Catholic for the intended spouse.

My fiancé/e and I want to marry in the Catholic Church. He/she has been married before and has applied for a declaration of nullity. When can we set a date for our wedding?

How much does it cost?

Pope Francis has asked dioceses whenever possible to provide their tribunal services free of charge. Depending upon how much your diocese is able to subsidize the work of its tribunal, you may be asked to pay a nominal fee. You may also be asked to make a donation following the completion of your case. Fees are typically payable over time, and may be reduced or even waived in cases of financial difficulty. Other expenses may be incurred when consultation with medical, psychological, or other experts is needed, or if you obtain the services of a private canon lawyer to represent you.

How do I start the process?